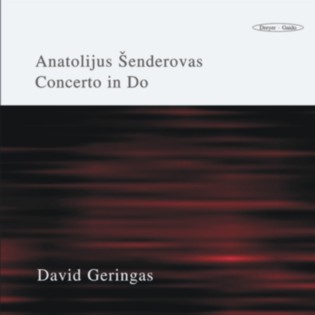 The work was a triumph and was awarded a prize for the best first performance at the Young Euro Classic Festival. The composer received the European Composer Prize 2002.

The 'Concerto in Do' was commissioned by Young Euro Classic for the European Music Summer 2002 and is dedicated to the cellist David Geringas. ("Do" is not only the key of the piece [i.e. "C"], it is also the name by which the cellist is known to his close friends and relatives.)

The artistic cooperation between David Geringas and Anatolijus Šenderovas goes back a long way. As far back as 1972 Šenderovas composed the Sonata for Cello and Percussion, and shortly after that, Four Pieces for Cello and Piano. Both works are dedicated to Geringas and are a standard part of his repertoire.

In 1975 the recording studio in Vilnius recorded these works for an LP production. As was standard practice at the time, the recording was sent to Moscow where it was to be endorsed by the "Arts Council" (in other words, the censors!).

On 21st July 1975 the recording was endorsed. However, it then became known that David Geringas, after winning the 4th International Tchaikovsky Competition and after many restrictions and prohibitions which made normal artistic activity almost impossible, had decided to emigrate.

For this reason, on 22nd July 1975, one day after it had been endorsed, the endorsement was rescinded. The word "endorsed" was crossed out and replaced by "recording rejected" and two illegible signatures…

That meant that the recording and the cover with the inscriptions should be destroyed. The original master-tape was indeed demagnetised. However, a good fairy, the editor Zinutė Nutatutaitė gave the cover back to the composer and managed to persuade the sound engineer Rimas Pupeikis (who is now director of the studio) to make a copy of the recording. This tape and the cover were kept in Anatolijus Šenderovas archives for 27 years….

This CD presents, for the first time, that historic archive recording which had not been made available to the public in soviet times. The restoration of the recording was done by Giedrius Litvenas of the "Lithuanian Recording Studio MA“.