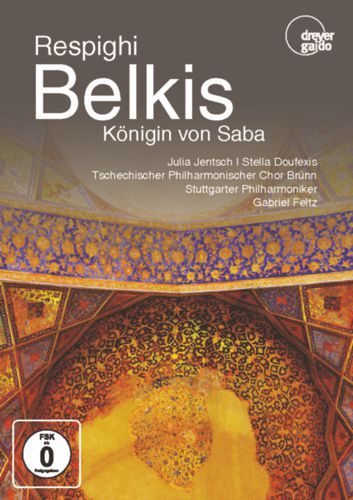 In June 2012 Ottorino Respighi’s ballet music “Belkis, Queen of Sheba” was given its German premiere in Stuttgart – this was only the second performance of the work ever, almost 80 years after its first performance at La Scala in Milan. It was one of Respighi’s last great works and the ballet was considered difficult to produce at the time it was written. Some 600 participants let one realize why the work had to wait more than half a century for a second chance. The Stuttgart Philharmonic helped bring the long-silent masterpiece to a triumphal come-back in a concert performance with Julia Jentsch as narratress, the mezzo-soprano Stella Doufexis and the Czech Philharmonic Choir, Brno. This is a unique music film, which goes way beyond the scope of the normal concert recording and tells the mythical story of the legendary Queen of Sheba. She undertook an arduous journey of many years through the desert and wastes to follows the call of King Solomon – a fairy-tale from a thousand and one nights, about beauty, power and wealth.