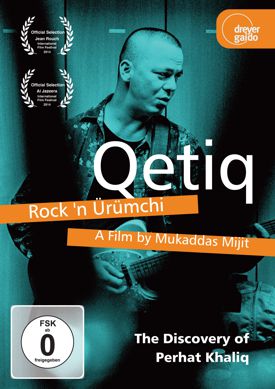 Ürümchi - capital city of Xinjiang Uyghur Autonomous Region in China and home to the Turkic people, the Uyghurs, is the departure point for this film. The city, which is marked by the ambivalence between its Uyghur tradition and global modernity, is home to the musician Perhat, who like many other musicians from the region had no ideas about ever leaving the city.
Since his appearance in 'China the Voice‘ in 2014 Perhat Khaliq is a famous rock star in China and the first Uyghhur rock star touring big theaters in the country.
A film about music that, just like the city, is caught up in the tension between tradition and modernity, about friendship that needs no words and about boundless optimism, which made not just one dream come true.
Perhat is receiving the Prince Claus Award in the Royal Palace in Amsterdam in December 2015.
"His rich voice and poetic lyrics are making minority culture accessible to millions, while also conserving and expanding a unique cultural heritage.“ (Prince Claus Award)