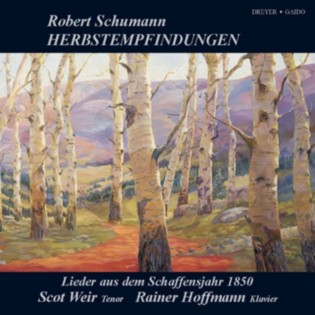 During his last creative period from 1849 to 1852 Robert Schumann felt compelled to explore the boundaries of the relationship between words and music. Vocal compositions of whatever type became the centre of his attention and outweighed his interest even for his main instrument, the piano, as well as for symphonic compositions. Schumann’s vocal works from his final period were influenced by two divergent movements: on the one hand they were expansive and ranged from Piano-Lieder, opera, oratorio and choral works to melodrama, to piano-accompanied recitation of the poetic word; on the other, the relationship between word and music, which for Schumann, as an intellectual and man of letters, had been decisive from his younger days, now became extremely intensive and intimate, as can be noted by the declamatory style, whereby the literary conscience is equally as important as the musical. This fine-polishing of declamation, which is manifested in the oratorio-like “Scene from Goethe’s Faust”, as in the works for double choir and the Piano-Lieder, coincides remarkably with the tendencies of Schumann’s compatriot and antipode Richard Wagner and anticipates the overly-sensitive, richly thoughtful and allusive treatment of the words by Hugo Wolf, or even the speech-rhythm of Berg’s “Wozzeck”.

A coproduction with Radio Bremen